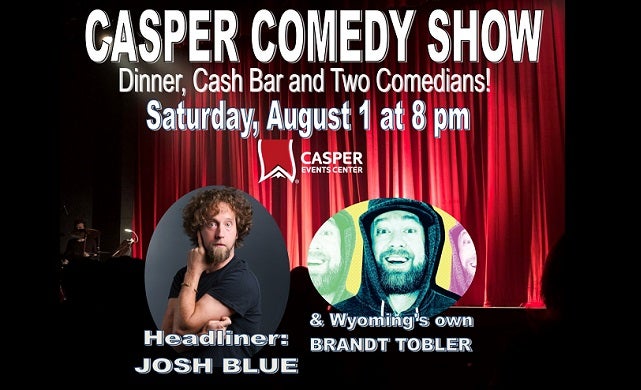 Casper, Wyoming – The Casper Events Center is pleased to announce CASPER COMEDY SHOW in the arena on Saturday, August 1. This night of socially distant entertainment will feature a delicious dinner, cash bar and two up and coming comedians. Headliner JOSH BLUE won NBC’s Last Comic Standing in 2006 and has appeared on The Tonight Show Starring Jimmy Fallon. Opening the show will be Wyoming’s own BRANDT TOBLER.

Following his groundbreaking win on NBC’s Last Comic Standing in the summer of 2006, JOSH BLUE has risen through the ranks from promising up-and-coming young comic to well-established and sought-after headliner at venues throughout the country.  Josh made his debut on The Tonight Show Starring Jimmy Fallon in the summer of 2018 followed by an appearance at the prestigious Just for Laughs Comedy Festival in Montreal on the William H. Macy Gala.  The year ended with him recording his fifth one-hour comedy special at his home club, Comedy Works in Denver, CO.  He continues to spread laughter and break down stereotypes of those with disabilities one sarcastic and though-provoking joke at a time.

BRANDT TOBLER was born and raised in Cheyenne, Wyoming. After doing nine years of comedy in Las Vegas he moved to Los Angeles and began to travel the country, performing all across the 50 states. Brandt has toured overseas performing for our troops, and has been seen on Comedy Central, Fox, and Espn. He has opened for some of the best comedians in the business, including Tom Segura, Sebastian Maniscalco, Brad Garrett, Jay Mohr, Jim Jefferies, Aziz Ansari, Tig Nataro, and Colin Quinn just to name a few. He has recorded two CD’s “Token White Boy” and “Ramblin and Gamblin” and is currently the host of the award-winning podcast “The 31”. Brandt’s memoir “Free Roll” was released in the summer of 2017, and is now being made into a movie. Brandt is currently living in Denver, Colorado, finishing up his second book, and performing all over the front range. He always delivers a laid-back, offbeat, hilarious brand of comedy you are sure to enjoy.

VIP Doors open at 6:30 pm. Public doors are at 7:00 pm. Dinner begins when doors open. Comedy show begins at 8:00 pm. VIP tickets are $69 per person and include early entry, tables closest to the stage, and a complimentary cocktail. Regular tickets are $49 per person. All orders must be made in even quantities in order to maintain appropriate social distancing. Due to current health and safety regulations, as well as decreased capacities, all tickets must be purchased in advance of the event date. Masks are encouraged. Social distancing is required. Tickets go on-sale on Friday at 11:30 am at www.SinclairTix.com, by phone at 800-442-2256 or in-person at the SinclairTix Box Office.

The safety and well-being of our guests, employees, and performers is our top priority at the Casper Events Center. Our cleaning procedures are thorough and comprehensive. Following recommendations from the Centers for Disease Control and Prevention (CDC) and local authorities, our staff is focused on the disinfection of high-touch surfaces, such as doorknobs, escalators, elevator buttons and bathrooms. We have also filled hand sanitizer dispensers throughout the facility.

Our staff, partners and guests are encouraged to follow standard health precautions, such as consistent hand washing and covering coughs and sneezes. We encourage individuals who are sick to stay home. We will continue to closely monitor the situation, so that we can quickly make adjustments should the CDC or local authorities recommend different or amended precautionary measures.

It's the last night of the College National Finals Rodeo. Catch 'em before they ride away. Tonight will be the best of the best. See the action yourself. 🎟️ https://bit.ly/2UfuBQ2
The CNFR Special Olympics Rodeo starts at 9 am this morning. Admission is free and open to all.
Check out Foreigner's appearance this morning on Fox & Friends! This is just a preview of what to expect for The Greatest Hits of Foreigner tour! https://bit.ly/3zERPiw Grab your tickets today! https://bit.ly/3auF7Ie
FREE Concert tonight after the CNFR performance. Hat Six Travel Plaza & Sleep Inn present Lucas Hoge. Free admission. All ages welcome. Dancing encouraged.
Happy Friday. Who's ready for another round of CNFR excitement?! Throw on some red, white & blue and #CowboyUp! Doors open at 5:30 pm for the tradeshow and the rodeo begins at 7 pm. 🎟️ https://bit.ly/3wyhIih
On sale now: TOBY KEITH Country Comes to Town Tour with special guests Colt Ford and Chancey Williams on October 17th in Casper, WY. 🎟️ Get tickets online at https://bit.ly/3gAqUgt, by phone at 800-442-2256, or in-person at the SinclairTix Box Office at the venue.
The Toby Keith presale ends tonight at 10 pm. Use promo code TK2021 Shop now at http://bit.ly/3q5aVtT
🚨Presale alert! Buy your tickets to @tobykeith before the general public. Presale valid today until 10 pm. Use promo code TK2021 at bit.ly/3q5aVtT Online only.
There are still a few spots left for the Father's Day Buffet Dinner at Hogadon Basin Lodge on Sunday, June 20th at 6 pm. Treat your dad to a meat-y good time. 🍖 🥩 Reservations and menu online at https://bit.ly/3vQtZhG
CNFR Performance #2 is TONIGHT. Doors open at 5:30 pm for the tradeshow and the event begins at 7 pm. There are some awesome vendors to check out, so get here early. Tonight we'll learn who'll be crowned "Coach of the Year." See the action yourself. 🎟️ https://bit.ly/35hG43I
Tuesday Night (Performance #1) is CASPER NIGHT at the CNFR. All tickets are just $10 each. Get out tonight and show these athletes how loud Casper can cheer! Doors open at 5:30 pm> https://bit.ly/2SqRLT6 #CNFR2021 #ChampionsComeFromCasper #CowboyUp #VisitCasper #ThatsWY
Hi friends. We're experiencing some technical issues with our phone system today. The Box Office IS OPEN. Come see us at the venue. We apologize for any inconveniences.
Doors are open for the Tuesday Morning Slack. Tickets are just $10. Come check it out> https://bit.ly/3pOVypq
Casper Comic Con, presented by Reliant Federal Credit Union, is coming soon! Who's been working on their cosplay costume?! Does anyone want to share a sneak peek photo? #CasperComicCon #Cosplay
Show dad how much he rocks this Father's Day. Celebrate with concert tickets starting at just $39! 🎟️ Buy tickets here: https://bit.ly/35bsyhZ
Doors are open for Monday Morning Slack. Tickets are just $10. Come check it out> https://bit.ly/2TopTz3
Treat your dad to a meat-y good time. 🍖 🥩 Father's Day Buffet Dinner at Hogadon Basin Lodge on Sunday, June 20th at 6 pm. Reservations and menu online at https://bit.ly/3vQtZhG
Who are you cheering for?! Tag your favorite teams & individuals below. 📣 #CNFR #CNFR2021 #ThatsWY #VisitCasper #SinclairTix
Fans - you have got to get up here today for the Roughstock Slack Round. First performance is at 1 pm and the ticket is good for 1 pm and 4 pm. PLUS - the intermission entertainment will be professional MOUNTED SHOOTING. Family fun starting at $10 per person. #CNFR2021
Come out to Hat Six Travel Plaza TODAY from noon to 2 pm to meet CNFR contestants and Mounted Shooter contestants. Plus, try your hand at heeling a steer, roping a calf, or shooting a balloon. #CNFR2021 #CNFR #VisitCasper
Three weeks until Dwight Yoakam takes the stage on the grounds of the Ford Wyoming Center! Kick-off the holiday weekend with Dwight. Tickets at https://bit.ly/3uYgETX
📢 Just Announced: Pepper Presents @Toby Keith Country Comes To Town Tour with special guest @Colt Ford and Chancey Williams at the Ford Wyoming Center on Sunday, October 17th. Pre sale: Thursday, June 17th from 10am - 10pm On sale: Friday, June 18th at 10am 🎟 More Info: https://bit.ly/3wcWdmW
Hours for the SinclairTix Box Office during CNFR will be: Saturday, June 12th & Sunday, June 13th: 10:00am-5:00pm Monday, June 14th: 6:30 am- 5:00pm Tuesday, June 15th: 6:30am-8:00pm Wednesday, June 16th - Friday, June 18th: 10:00am- 8:00pm Saturday, June 19th: 10:00am- 8:00pm
🎤 Concert Announcement coming tomorrow, Friday at 7:20 am. Tune in here or to MyCountry 95.5. 🤠
Check out this awesome article in Cowboy & Indians Magazine about the CNFR and Casper: https://bit.ly/2SsKu4V #CNFR #CNFR2021 #VisitCasper