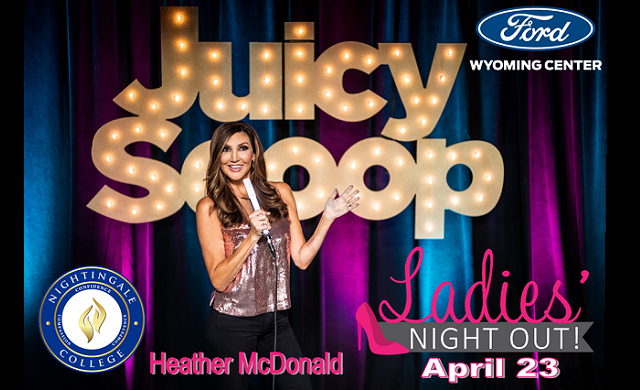 This ultimate ladies night out will be an evening filled with ladies, laughter, libations, and retail therapy!

Today’s women are part nurturer, part chauffer, part chef, part housekeeper, part teacher, and the list goes on! Then, along comes 2020 to provide a whole new level to their never-ending ninja skills. It’s time to honor these busy, thriving women with a night designed for them – a night off from all of the mom duties and the opportunity to connect with the ladies for laughing, shopping, and overall debauchery.

Doors will open at 5:30 pm. There will be a tradeshow featuring a variety of retail vendors and a Ladies Night Out Cocktail Lounge. The show will begin at 7:30 pm. Headliner Heather McDonald’s latest stand-up Special, JUICY SCOOP, recently premiered on Amazon Prime Video and racked up an unheard-of 1,200 5-star reviews in its first 2 weeks of being available. It continues to grow and make people laugh daily. Her debut stand-up special I DON’T MEAN TO BRAG originally premiered on Showtime and then was later acquired by NETFLIX.  She is a headlining comedian who has consecutively sold-out shows at clubs and theatres throughout the country.

Tickets will be $29 and $39 each. VIP Tables of 6 are available for $300 each and include a bottle of champagne plus the ultimate Ladies Survival Kit.

Heather’s relatability is celebrated in her stand-up comedy act, podcast, and all of her creative content. She is always sharing honestly about her 20-year long marriage, 2 teenage sons, and being a stepmother, all while making girl’s nights out her main priority in life.

Heather’s celebrity impressions and Barbie reenactments of tv shows on her multiple social media platforms have gone viral and continue to bring joy to the world.  Her wildly successful, comedy and pop culture podcast, Juicy Scoop with Heather McDonald, is in its fifth year and is coming up on its 500th episode with 60 MILLION downloads. The show has over 15,000 5-Star Reviews on iTunes and is ranked in the top 10 Comedy Interview charts. Her loyal listeners are drawn to her unique ability to always get the juiciest scoop from her celebrity guests while laughing out loud in public with their AirPods in.

Heather is regularly featured on WENDY WILLIAMS talk show, giving her opinion on the hottest topics to Wendy. She is most recognized from E!’s top-rated show CHELSEA LATELY where she wrote, produced, and appeared for its entire 7-year run. She also starred in AFTER LATELY, a mockumentary series on E! for its 3 successful seasons. Heather was also a contributing writer who had a featured role in major motion films “White Chicks” and “Dance Flicks” by The Wayans Brothers.

She was the host of TLC’s All About Sex and Hollywood Today Live. She is regularly featured on HLN, Nightline, CNN, 25 Words or Less, Punchline, RuPaul’s Drag Race, The Tonight Show, Keeping Up With the Kardashians, and too many more to list.

Stephanie’s journey with comedy began as a child when she learned the power of making people laugh. Eventually, she began pursuing stand-up comedy in her 30s, while also juggling being a stay-at-home mom with 2 small children.

Nine months after her first time on stage, Stephanie won a trip to the Las Vegas Comedy Festival which launched her career, and she has been on the Denver comedy scene for over 17 years.
Stephanie appeared on Nick at Nite's TV Show "America's Funniest Mom". She was a co-host on The Steve and Stephanie Morning show on KOOL 105 in Denver, CO. She also performed at the Great American Comedy Festival and is a co-founder of the MentalPause Comedy Show.
When Stephanie isn’t performing comedy on cruise ships or corporate events, she is a humor coach for entrepreneurs and speakers. Since her days in radio, Stephanie has been a voice-over talent out of her home studio.