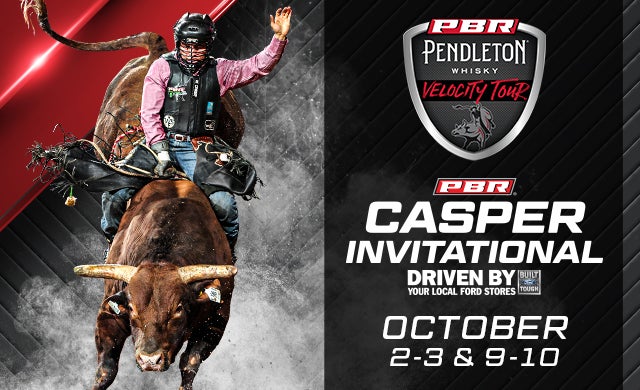 For the third time in as many years, PBR’s (Professional Bull Riders) Pendleton Whisky Velocity Tour will buck into Casper, Wyoming. In a league first, the 2020 edition of the tour stop in the Cowboy State will feature four separate events, with America’s Original Extreme Sport bucking into the Casper Events Center on Oct. 2-3 and Oct. 9-10 for the fan-attended Casper Invitational.

In cooperation with Casper-Natrona County Health Department, as well as the Casper Events Center, PBR has instituted a series of fan safety protocols for a safe and responsible event, including:

On July 10-12, PBR welcomed back fans for the first time in Sioux Falls, S.D. for the playoffs of a special team tournament created to keep the sport going during the pandemic, the groundbreaking PBR Monster Energy Team Challenge, as well as a Pendleton Whisky Velocity Tour event.

When the PBR’s expansion series was last in Casper, 2018 PBR Rookie of the Year Keyshawn Whitehorse used a dominant 2-for-2 showing to capture the event win.

The victory, which included an 87.5-point ride on Hy Test and 86-point effort aboard Smooth Sailing, was critical in Whitehorse’s efforts to qualify for the second PBR World Finals of his career.

In 2018, the Pendleton Whisky Velocity Tour debuted in the Oil City as Brazilian Alisson de Souza rode to the event win as the only rider to go a perfect 2-for-2. The inaugural tour stop also featured a runner-up performance by veteran rider and 12-time PBR World Finals qualifier Sean Willingham.

Positioned near the end of the 2020 season, the four-event Casper Invitational will be critical for riders attempting to qualify for both the season-culminating 2020 PBR Pendleton Whisky Velocity Tour Finals and the sport’s most prestigious event, the 2020 PBR Unleash The Beast World Finals.

Nightly, all 45 riders will attempt one bull each in Round 1 of the Casper Invitational. The Top 15 cowboys will then advance to the championship round later that evening for one more out and a chance at the event title.

At each of the four events, a cowboy will have the opportunity to win a maximum 44 world points, with one rider having the opportunity to exit the two-weekend, four-event marathon with 176 world points. Additionally, each of the four event winners will earn a berth to compete on the elite PBR Unleash The Beast, featuring the Top 35 bull riders in the world.

THE RAMKOTA HOTEL is the official HOST HOTEL for the PBR. They have set up a discounted room rate for PBR fans! Call the hotel directly or use the link below to reserve your room today. Breakfast is included! https://bit.ly/3lIWZmS

PBR's POD Seating was created to execute a safe seating environment, limiting crossover interaction between fans where available. POD Seating is available in select section groupings of 2, 3, 4 and 5 seats. You must purchase all tickets in a selected POD grouping.

Fans sitting in all POD Seating are asked to respect one another to provide a safe environment for everyone in attendance.

Ticket prices do increase by $5+ on Day Of Show.